Good friends, 'tis the four-hundredth anniversary of William Shakespeare's death (and possibly his birth as well). As avid members of the Shakespeare fandom celebrate the Bard's legacy across the Internet (and Anti-Stratfordians raise a clamor of unnecessary consternation on behalf of the real author of Shakespeare's plays, who is undoubtedly Francis Bacon/Edward de Vere/Christopher Marlowe/a time-travelling Lin-Manuel Miranda), I asked the characters of an ongoing project of mine what Shakespeare means to them.

"Why don't you ask him yourself?" said one necromancer, Miss Siona Donne. She promptly proceeded to throw open a curtain, revealing not only the zombie of her ancestor John Donne, but a Zombie William Shakespeare as well. (Zombies, in this universe, are well-possessed of their minds and do not require a diet of brains, barring the results of any fits of nostalgia they may have for Tudor-era chicken-brain blancmange.)

This brought many, many questions to my mind. Is this the reason Shakespeare's skull is missing from Holy Trinity Church? Didn't Shakespeare put a curse on his grave, and if so, what would it do to our gutsy necromancer? What's the relationship between Zombie Shakespeare and Zombie Donne? And why would someone want to raise Shakespeare from the dead in the first place?

Of course, the only acceptable answer comes in the form of a short story.

Good frend for Iesvs sake forebeare,
To digg the dvst encloased heare.
Bleste be the man that spares thes stones,
And cvrst be he that moves my bones.
—epitaph of William Shakespeare, inscribed on his grave at Holy Trinity Church

It took quite a lot of effort to anger John Donne, 17th-century poet and priest. For a writer of such passionate and sensual literature, he had a tendency to remain remarkably unruffled when faced with circumstances others would panic at. In verse he had already bitten his thumb at Death and dared all three manifestations of God to batter him at once. He had compared flea bites to sex and his member to a compass and even commissioned a portrait of his dead body so that people would be able to recognize him when he rose from the grave, as he undoubtedly would. And yet, somehow, Siona Donne, professional necromancer and his descendant from hundreds of years in the future, had managed to get under his skin with eight casual words: “So I just raised Shakespeare from the dead.”

To which John responded, “THOU DID'ST WHAT?”

Siona smirked. God's bones, she was insufferable. “You seemed lonely,” she said. “Thought you might appreciate some company from your own time. You mentioned you two were friendly at the Mermaid Tavern, I thought you'd get a kick out of seeing him again.”

“Thou hast lost thy mind, woman!” he hissed. “Shakespeare cursed his grave, and I know full well the potency of his magic, received from the same three-personed God that did give thee thine! The wrath of the Lord shall be upon thee anon!”

“Oh, enough with the Christian soldier shtick, John, we're necromancers. Talk about 'the Lord' one more time and I will personally send you back to him,” Siona said, rolling her eyes. “Anyway, aren't you even a little excited to see old Billy Shakes again?”

“'Billy Shakes'?” John shook his head. The amount of nerve this woman had... “Thou couldst have picked anyone else, anyone at all. My children. My Anne. John Fletcher. Ben Jonson. Even King Charles—he was a necromancer himself, wasn't he? Any of those would have been better than Will.”

This only seemed to amuse Siona further. It was hard to tell what she was saying between her peals of laughter, but it sounded an awful lot like “another head!” After a moment, she regained her composure and said, “Look, William Shakespeare is in that room right now, swearing his head off in iambic pentameter. This is the only chance I'm giving you two to be alone together. You don't want me watching when you two make out, do you?”

John's jaw dropped just a little. “How in God's name didst thou know?”

“Shakespeare's Sonnet 57,” said Siona, “along with your very own Sappho to Philaenis—a poem which, if I'm not mistaken, is supposed to be about two men in love, but some editor decided it would be better off titled after Lesbian lesbians, and you were a bit too dead to argue.”

John raised his finger and opened his mouth to say something, paused in disbelief, then managed to sputter out, “Lesbians?”

“You've got so many misguided doctoral theses to overturn,” Siona said, patting him on the back as she made her way to the door that led to Shakespeare's room. “Now, to see or not to see?”

“I suppose I'd better talk to him before he curses thee once more.” John sighed and approached the door as well. Siona smiled, then unlocked and opened the door. The Donnes were promptly treated to a rousing recitation of a passage from King Lear from Will himself, who seemed to be devoting every fiber of his being to screaming that Siona was “a knave; a rascal; an eater of broken meats; a base, proud, shallow, beggarly, three-suited, hundred-pound, filthy, worsted-stocking knave; a lily-livered, action-taking knave, a whorish, glass-gazing, super-serviceable finical rogue; one-trunk-inheriting slave; one that wouldst be a bawd, in way of good service, and art nothing but the composition of a knave, beggar, coward, pandar, and the child and heir of a mongrel bitch: one whom I will beat into clamorous whining, if thou deniest the least syllable of thy addition!”

“'Swounds, Will,” said John, deadpan, “thou hast a bloody good memory for a corpse.”

“I'll show myself out,” said Siona. She shut the door.

For a full minute, neither man spoke. Finally, Will broke the silence with a quiet, “She does know there's a curse on my grave, doesn't she?”

“I did try to tell her. She ignored me completely,” said John, rolling his eyes. “What does the curse do? Thou never didst tell me.”

“Never had the time,” said Will. He seemed to grasp the subtleties of 21st-century English more readily than John did, not that John was really trying. “The curse conjures a glamour to change the appearance of the one who desecrated my grave.”

John raised an eyebrow. “And to what does it change the appearance?”

Shakespeare leaned forward, a grin spreading across his face even as his brow furrowed. “Tell me, John,” he said, “where wast thou in 1596?”

“I was in Cádiz, fighting against the Spanish.”

“So thou never didst see A Midsummer Night's Dream?”

“Thou art about to.” Shakespeare made a theatrical gesture and, as like an actress entering on cue, Siona Donne stormed into the room—at least, John assumed by her clothing and demeanor that it was indeed Siona, for her head had been replaced by the head of an ass.

“Get. It. Off,” she hissed at Will. John had never seen a donkey look so livid in his life.

“Here's the deal, strumpet,” said Shakespeare, leaning back in his chair once more. From the smug expression on his face, one would think he'd pulled a prank on the queen herself. “Only I can undo the curse upon thee, and I'm not feeling particularly gracious at the moment.”

“I'll make you gracious,” Siona growled, and with magic she ignited a flame in her hand and took a few menacing steps toward the two poets. John glanced at Will, who waggled his eyebrows, and they both did their best to stifle their laughter. It was very, very hard to take a threat seriously when it was coming from a donkey.

“However,” Will continued, “I am willing to make a trade. I give you your head back, you give me my body—or rather, what's left of it.”

“Deal,” said Siona at the same time John said, “What?” For Shakespeare's undead form appeared to be perfectly intact, all wrapped up in handsome and well-preserved flesh, just like John's was. Then he remembered: Shakespeare's family hadn't been necromancers. They wouldn't have had the slightest clue how to magically embalm him. And Shakespeare's magic was that of glamours, of appearances. So what appeared to be a healthy walking corpse was actually—

Will sighed and, with another flourish of the hand, unseamed himself, stripping away the layers of magic that gave him the illusion of a body. All that remained was a skull floating nearly two meters above the ground. It hovered there in haughty silence, waiting for Siona to provide an explanation.

“I could only get the head,” the necromancer said with the careless shrug of someone who truly had no shame. One could, in fact, say that her attempt at concern was half-assed.

Shakespeare rolled his eyes—how he managed to do that with no eyes, the world would never know—then directed his gaze toward John. One look at his fellow poet's face and his eye sockets widened. “Don't do it,” he said.

John Donne tried. He really did. But after some careful thought, he realized he owed it to the world of Great Literature to do the deed, and besides, there were worse jokes to be made about a bodyless head from Tudor England.


He reached out and took Shakespeare's skull in his hand, and with glorious solemnity, said: “Alas, Poor Yorick.” His eyes glittered with amusement, as if they had caught a falling, dancing star. “I knew him, Horatio.” 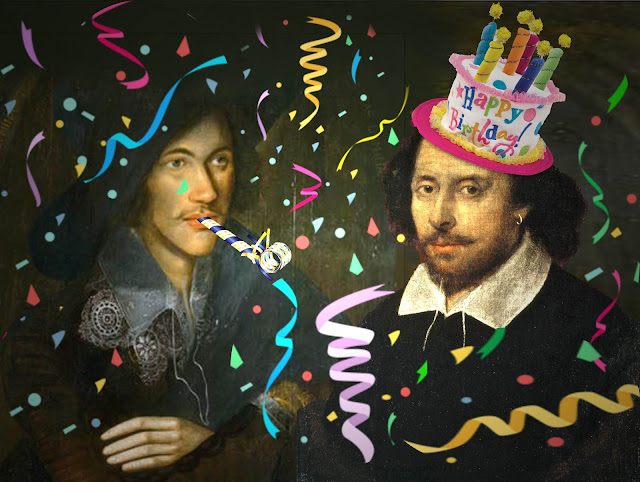