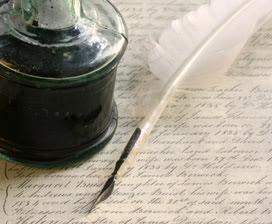 Picture is taken from http://totheshore.files.wordpress.com/2010/04/quillpeninkwell1.jpg, courtesy of The Internet. (I seriously hope I don't get sued for that phrase sometime in the future.) It depicts a quill pen and ink, evoking Shakespearean sonnets. These poems are not quite the same as those.

Neither of the two poems I'm sharing with you today are exactly what their titles imply.

The first, a "sonnet," happens to be not of love, but of anger and even hate. Also, it is (somewhat mercifully) not directed towards a specific person, as many sonnets—be they romantic or accusatory—are. The second, a "villanelle," is written not in villanelle format, but in sonnet format. It too has a dark tone, though it is the lack of emotional articulation ability, rather than the presence, that lends it this. (It was written to be spoken in a play by an android incapable of feeling.) Grouping the two poems together is thus natural—both are melancholy sonnets that do not quite fit the connotations of their forms.

I seriously hope these poems do not upset you all.

For Maya and Matilda

From http://loveforliana.com/wp-content/uploads/2010/12/footprints-snow-love-for-liana.jpg, courtesy of The Internet. 'Tis a very lovely image, methinks, and evocative of certain phrases from this poem.

Poetry fans, you're in luck--the next several posts on this blog will contain a plethora of poetry, as I have recently had to complete two collections of poetry for school. The assignment for this one was to write a poem in the style of another, more famous poet, so I have attempted to imitate the poetic style of the inestimable Maya Angelou.

Another inspiration for this poem was the story of Matilda, Lady of the English. I don't think you have to know her story to understand the poem, but it might help.


For Maya and Matilda
Read more »
Posted by Amata le Fay at 6:30 PM No comments: