Last Wednesday, my Chem class was doing a lab experiment involving gas laws, but when my teacher handed out the instructions, there was a glaring apostrophe error smack dab in the middle of the title. I groaned and scribbled the apostrophe out with my pen. However, later on, my lab partner Pat speculated that maybe the worksheet was talking about the actual activities of a person named Gas Law. He then proceeded to draw "Gas Law, Private Eye". I then countered with a drawing of "Miss Charlie Boyle," whose "voluptuous volume made the room grow warmer".

You can probably guess where this is headed.

But wait! There's more! In the style of Garrison Keillor's "Guy Noir," I decided to record myself reciting this story and put some snazzy noir music in the background. You can listen to that recording below and read the actual text of the story under the cut.

Character “Gas Law” created by Pat O'Connor; special thanks to Mrs. Martin for the chemistry, Mr. Morisseau for the “Maximum Entropy” name, and whoever misplaced an apostrophe in “Gas Laws Activities”.

The Omniscience vs. Cleverbot 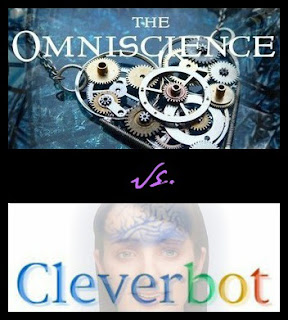 So, I was lurking about on the internet when I discovered (or rather, rediscovered) a project called Cleverbot, a computer program (even though it insists upon its own humanity) designed to learn from online conversations with humans and apply the knowledge gained there to other conversations, progressively becoming more "human" with each conversation.

And I'm like, "But that's the Omni!" (You all remember that NaNoWriMo novel I'm supposed to be working on.) "It's the Omni, but specified for conversations rather than decisions! What if it was a rudimentary version of the Omni technology? What if the Omni picked up on its signal and engaged it in conversation?"

Cleverbot's lines are totally authentic here. Technically, I only wrote half of this conversation.