Kevarya: An Introduction to the Kingdom


I'm back! Yes, after a long and arduous journey through Camp Nanowrimo (total wordcount: 55,447), I have returned with the greater part of a novel and some new worldbuilding information. So who's excited to hear me ramble about the history of a country that doesn't exist?

An Introduction to
THE KINGDOM OF KEVARYA


The Kingdom of Kevarya was founded 250 years prior to the rise of the fe Normonne kings (Fe Normonne Era). The first king, Talga fe Danaiye, is said to have forged the nation when he forged his crown of gold, silver, and copper, calling down lightning to weld together the metals as he united his own people, the Khasakan hunters and horsemen of the southeast, and the Slane who lived in the forests and along the river of the same name. However, the formation of Kevaryese culture was more likely to have occurred gradually, over a long period of time, as evidenced by records written in the Kevaryese language that predate King Talga’s birth. The fact that the two peoples shared a language was actually one of the main factors in unifying them, allowing trade, intermarriage, and cultural exchange. 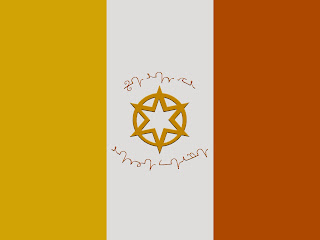 Kevarya is a hereditary monarchy ruled by the king (currently Mathylde fa Normonne) and the Council of Nobles, each of whom represent their own estates and constituents. The king also appoints a Highest Adviser (currently Lord Grigory fe Alperen), usually a high-ranking noble who may be related to the royal family, to serves as head of the council. Laws are proposed, debated, and voted on by the nobles, with the king's decision breaking any ties. The king reserves the right to propose the revision, appeal, or repeal of laws before they are enacted.

The judicial system operates under common law, with courts, legal advocates, and judges (appointed by the local nobility or a representative thereof). There is no trial by jury, but a defendant can invoke the right to have their case heard before the king, effectively delaying their sentencing due to the sheer number of appeals the Crown has to deal with. Trials of noble defendants are automatically heard before the king, as are charges of treason. There is no trial by combat or by ordeal.

The rise of the middle class is now giving merchant guilds an unprecedented amount of influence, especially in cities. While still subject to the nobility and monarchy, these guilds control the economy to such a degree that the government must take their needs into consideration when enacting laws. There has been talk of allowing certain guilds representation in Council, but this is a controversial issue and many nobles are opposed to it.

Before the Kevaryese monarchy was established, the steppes and mountains of southeastern Kevarya were populated by the Khasakan nomads, while the taiga and forests of the northwest were home to the Slane. The Khasakan were known for riding horses, training eagles to hunt, and for their intricate smithing and metalwork—the only permanent fixtures in traditional Khasakan lands were forges and mines in the Mountains of Old. The Slane also relied on hunting, though they lived in permanent settlements and farmed the land along the Slane River to supplement their food supply. The two peoples were in frequent contact with one another and shared a creole language that would become Kevaryese.

When the Yenoui Empire to the north attempted to expand into Slane and Khasakan lands, Aldar fe Danaiye, leader of the Khasakan, established a defensive pact between the two peoples. Together, the Khasakan cavalry and Slane archers repelled the Yenoui invasion so successfully that the Yenoui sued for peace, fearing that the alliance would seek to invade their empire in turn. This defensive alliance laid the foundation for the kingdom of Kevarya, which would be founded by Aldar’s grandson, Talga fe Danaiye.

REIGN OF THE FE DANAIYE

This was the first dynasty of Kevaryese kings, beginning with Talga and ending with Aldar Oro (Aldar IV) fe Danaiye.

King Talga fe Danaiye’s reign has been highly mythologized in the centuries after his death, making it all but impossible to separate history from legend. In an event known as the “forging” of Kevarya, Talga united the Khasakan and Slane through the act of magically forging his crown, imbuing both king and kingdom with magical authority. Talga then married a Slane noblewoman, Queen Nataya fa Evai, who funded and oversaw the construction projects that transformed her home town into the new capital, the City of the Crown. Talga spent little time in the city, instead traveling Kevarya with his horsemen, convincing local lords to swear allegiance to him and to the new state. Nevertheless, he and the queen had five children, three of whom survived to adulthood, and both the fe Ravdor and fe Normonne claim descent from Talga and Nataya.

The direct descendants of Talga’s eldest son, Aldar, ruled Kevarya until 131 F.D.E., when King Aldar Oro (Aldar IV) was assassinated by a coalition of nobles in a coup led by his wife, Queen Kysenya fa Yasha, and the future King Ivan fe Ravdor. Among their grievances against the king were his violent military campaigns against his brothers, his mistreatment of the queen and her daughters due to frustration at the lack of male heirs, and his soldiers’ policy of burning their defeated enemies’ crop fields, which led to a year-long famine in the north. Before his death, Aldar Oro was forced to name Ivan fe Ravdor as his successor. Queen Kysenya arranged for her ten-year-old daughter Arisa to be betrothed to Ivan’s 8-year-old son Aleksei, then married Ivan himself, thus securing her own position as well as her daughter’s future.

REIGN OF THE FE RAVDOR

This dynasty lasted 119 years, from the reign of Ivan and Kysenya to Ivan Iro (Ivan III) fe Ravdor. Despite their claim to the throne originating in a violent coup, the fe Ravdor are primarily known as peacekeeping kings under whom Kevaryese culture flourished. They are also responsible for the predominance of blonde hair and gray eyes in the royal family, who had previously been noted to have darker Khasakan features.

Significant events in the reign of the fe Ravdor include the first foreign-born queen of Kevarya, Queen Margery “Masha” of Galara. She was the daughter of the Predicant, head of the Galaran theocracy, who would later be deposed and killed during the Galaran Secular Reformation in 57 F.R.E. Some of the mutual distrust between Kevarya and Galara stems from this conflict, though the two nations would not take military action against one another until the War of Kevaryese Succession, 125 years later. Another important figure in fe Ravdor history is Aleksei Enro (Aleksei II), who reformed the judicial system and abolished trial by combat and trial by ordeal. He and his close companion, Lord Adrian fe Kariny, are believed to have been lovers, though Aleksei Enro also married a woman and fathered children, including his eldest son and heir Ivan Iro (Ivan III).

Upon Ivan Iro’s death in 119 F.R.E., the crown was passed to the king’s son-in-law, Lyan fe Normonne, through his marriage to Ivan’s only daughter, Princess Mathylde fa Ravdor, the previous year.

REIGN OF THE FE NORMONNE

This is the current ruling dynasty, having been in power for 94 years, from the reign of Lyan fe Normonne to Mathylde fa Normonne.

King Lyan ruled for 38 years and is primarily known for his love of hunting, lavish feasts, and tournaments. He died of blood loss after being injured by his hunting eagle. Lyan's eldest son, King Lyanve (Lyan II), ascended to the throne but died just two years later of illness, to be succeeded by his brother King Enrolai fe Normonne.

Enrolai’s son and heir, Crown Prince Stepan, grew increasingly paranoid due to the rising influence of his older sister, the future King Mathylde fa Normonne, and in 62 F.N.E., he poisoned his father and fled to Galara shortly after. Enrolai disinherited his son and named his daughter his heir, an unprecedented act that led to King Mathylde becoming the first female ruler of Kevarya in 63 F.N.E. Stepan contested her claim and, with the support of the Galaran Parliament, fought his sister in the War of Kevaryese Succession. Despite ruling Kevarya from 66-71 F.N.E. (a reign which his sister would later annul), Stepan was ultimately defeated and Mathylde’s reign continues to the present day.

The traditional Kevaryese religion has no deities, but rather focuses on the souls of deceased Ancestors (Kevaryese: Elenvir) who have “crossed over” into the realm of the dead. Each practitioner honors the souls of their family, other significant loved ones that have predeceased them, and the six First Ancestors, whose origins are detailed in the creation myth and who have taken on a status akin to sainthood. The Ancestors can protect, guide, and lend strength to those who call upon them in prayer.

Another important tenet of Kevaryese religion is the belief that language is sacred and can create and alter reality itself. Names are of particular importance, as Kevaryese culture insists that each time a person's name is said reaffirms its validity. Names are given at birth; to take a new name for oneself is thought to have powerful spiritual repercussions. Nevertheless, many Kevaryese use diminutives, pet names, and epithets to refer to themselves and others.

There is no officially-mandated religion in Kevarya, though the monarchy and nobility typically practice Ancestor worship. The One God has a significant following in the City of the Crown and along the al-Aklim’a border, as does the Enhedua Pantheon. Religious minorities make up roughly 20% of the Kevaryese population (35% in cities) and are entitled to equal protection under the law, a right granted to them by the legal reforms of King Aleksei Enro (Aleksei II).