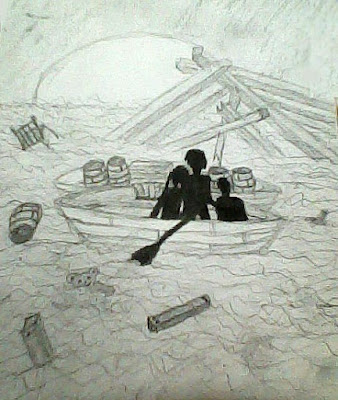 An illustration of this story, drawn my myself circa 2013. You can probably guess what natural disaster is about to occur to our poor family of protagonists.

This is very much a spiritual successor to Barton Hollow, as I started writing it shortly after finishing that story. It was first conceived during the 2013 Juniper Institute for Young Writers and, like To Avis Ladongale, this story is one I've retired. I have a wealth of excellent critiques, but after a few years of hiatus, I feel I have outgrown it. Perhaps it would succeed in a different form, but changing the form would involve shifting the focus of the story--and I wanted to stay focused on the development of the narrator's voice and how her language reflects the colonization of her culture.


Where you gon' run to, all on that day?