Those who know me in real life may already know that I've been working on a massive update to this website. This is not that update. This is, instead, random excerpts from projects I've been working on (Kevarya, the Danse Macabre/Crossfire universe, and an interactive game called Villains), some of which have been previously posted on my Tumblr, to some praise from random strangers on the Internet: 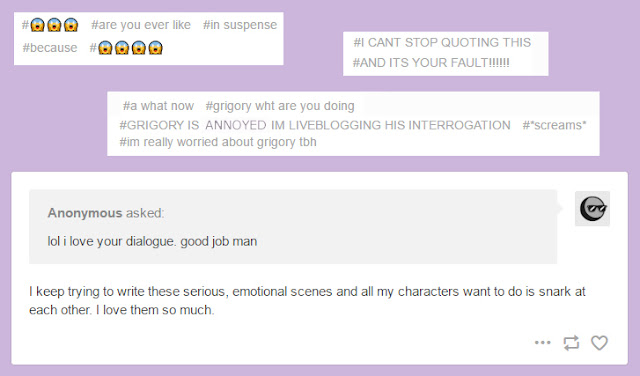 Image description: Three screenshots of Tumblr post tags, reading: "#[three shocked emojis] #are you ever like #in suspense #because #[four shocked emojis]," "#I CAN'T STOP QUOTING THIS #AND IT'S YOUR FAULT," and "#a what now #grigory wht are you doing #GRIGORY IS ANNOYED I'M LIVEBLOGGING HIS INTERROGATION #*screams* #i'm really worried about grigory tbh," followed by an anonymous comment, "lol I love your dialogue. good job man," and the author's reply: "I keep trying to write these serious, emotional scenes and all my characters want to do is snark at each other. I love them so much."

Welcome to Things I've Written, Entirely Out of Context. I hope to make this a monthly series, so you have not seen the last of these amusing glimpses into the lives of my characters.

Disclaimer: These excerpts come from works of fiction. Names, characters, places, events and incidents are either the products of the author’s imagination or used in a fictitious manner. Any resemblance to actual persons, living or dead, or actual events are probably just a coincidence.

Hours later, as Elena sat alone in the al-Hassam, there was a knock on  the other side of the glass wall. Elena grinned,  told Masha to come in,  then raised their eyebrows and waited for her to speak first.

“Lord Grigory must really hate that cat,” Masha said dryly. “I believe I learned no less than five new Kevaryese words that no young lady of fine breeding should ever know.”

“I would ask what they were, but we are in the house of my God,” said Elena.

“What was most amusing, in my opinion, was little Grimalkin’s response to Lord Grigory’s admonishment of her behavior,” Masha continued. “The Highest Adviser of Kevarya, the second-most powerful person in the realm, turns the full force of his scorn onto this cat, lecturing her on her arrogance, and what does the cat do? Give Lord Grigory a haughty glare in return, then proceed to lick the fur of an area that I will politely but inaccurately report is her tail.”

Elena could not help but burst into a fit of giggles. Masha, for her part, kept her composure, though it was clear that it took quite a lot of self-control to restrain herself from laughing. After a minute or so, Elena grew sober enough to ask, “Did  he tell you about the Frost Moon Ball of Year 83?”

Masha put her hand to her brow for a moment, then said as calmly as she could manage, “I cannot believe that kitten climbed up the back of his wife’s dress—”

“—then from her shoulder pounced on the ambassador’s head—”

“—and licked the bald spot—”

“Better than her own tail, at least.”

Thyld raised her eyebrows. “You’re the Highest Adviser. With both of us gone, who will lead Parliament? Lord fe Tyer?”

The two shared a look of contempt. Dimitriy fe Tyer was a boorish prat whose egotism was only matched by the vitriolic hatred spewed forth in his speeches. A week with him in charge and the City of the Crown would be up in flames as the panicked lords of Parliament fled to build a wall between fe Tyer and the precious lands that had not yet been seized by the tantrum-throwing man-child.

“Not him,” said Grigory. “ Someone with restraint.”

Lord Grigory was under the impression that his relationship with Sebastian was a well-kept secret, but when a man spends the entirety of his life unmarried, names a distant cousin heir to his lands, and shares his living quarters with the also unmarried knight who pledged his services to him shortly after they met during the war, it takes a particular kind of person not to see what is right in front of them, and a very particular kind of person not to realize that he hasn’t exactly been subtle about it.

“Very well,” said Grigory, speaking much more quietly now. “I will stay, and you will go. And if in a fit of frustration I happen to challenge Dimitri fe Tyer to a duel before you return, let it be known that had I gone with you, it would not have occurred.”

“I would hope that any second-in-command of mine would have enough sense not to get involved in duels,” said Thyld evenly. “Nevertheless, your concern has been noted.”

Her companions know that she is old enough to remember what life was like before [the apocalypse]. She must be as old as their parents, or even their grandparents, and yet she barely looks a day over thirty. When they ask her why, the Lady Reaper smirks as she replies: “Maybe it's magic. Maybe it's Maybelline.”

[Your twin] stared at you for a moment, silent, before declaring, “That's stupid. Be a pink ostrich. They run really fast.”

[Your twin] gave it some thought. “Can I still be an ostrich?”

What do you do next?

-Punch the nearest wall in frustration.

You ball up your fist and slam it into the wall. The plaster of the wall easily gives way, and you look with satisfaction at the jagged hole you made. You look around to check your housemates' reactions. No one is even looking in your direction.

Sighing, you pull your fist out of the wall and massage your slightly bruised knuckles. Suddenly, a sound like the rustling of paper fills your ears. It seems to be coming from inside the wall. You look up. The hole you made is closing, a wood pulp-like substance filling the cracks — almost like the wall is healing itself. “What the hell?” you mutter under your breath. Your housemates remain nonplussed.

They captured him within five minutes, a sergeant and eight of his men surrounding Grigory with swords drawn. He went with them quietly, though they still tied his hands behind his back and made a show of dragging him back into the Citadel to their commander. “We found Lord fe Alperen, Your Grace,” the sergeant said, shoving him onto his knees before a young woman with brown hair flowing down her back. She wore a polished breastplate over her gown and a sheathed sword on a sash around her waist, but they were in too pristine a condition to have actually been used in combat. Still, she looked down at him with a smile more ferocious than any warlord. Your Grace. The styling of a Queen, he thought dazedly. Stepan has a Queen.

“Hello, Lord Grigory,” she said. “My name is Amity Blackwater of Galara. I’m the wife of the rightful King, your nephew.”

“Oh, fuck,” was what came out of Grigory’s mouth.

“Shall I send for something to eat or drink?” she asked Grigory. “You’re looking rather pale.”

“Not unless you have alcohol strong enough to render me unconscious.”

“Why is it you don’t have a wife, Lord Grigory?” came a whisper in his ear, as if his interrogator knew his thoughts. He tensed, and his pulse raced under her fingers.

“Because I’m already married to a small brown hedgehog,” he managed to say, snapping his eyes open.