The Omniscience: Becca in the Maze 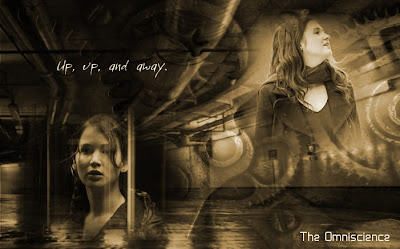 Do you like it? I photoshopped it myself. On the bottom left is Jennifer Lawrence-as-Lilah, my book's main character, and on the upper right is Karen Gillian-as-Becca, the main character of this excerpt.

So, I haven't been writing a lot of new stuff recently, though hopefully that will change as Creative Writing class gets in full gear. Still, I thought you lovely blog-stalkers readers deserved a new morsel of writing, so here's another excerpt from The Omniscience, my currently-being-revised Nanowrimo 2011 novel. More info on the book here.

Longtime blog followers will have already met Lilah, the main protagonist. Now it's time to meet another crucial character--Becca Pond.

Becca in the Maze


The thick cable next to her recoiled onto itself and fell eighty feet down to the bottom of the shaft.