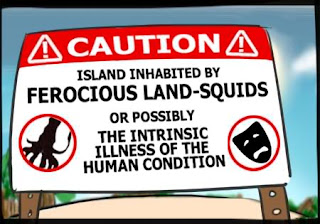 From http://community.sparknotes.com/index.php/2009/11/24/blogging-lord-of-the-flies-chapter-5-beast-from-water/, regarding Lord of the Flies. It doesn't quite fit with the seriousness of this piece, but it's one of the few things that made reading that book bearable.

This has been hanging around on my computer for quite some time now, and I just realized today that you all might want to read it.

Anyway, you may be wondering why, if I hate LOTF so much, why am I writing essentially a fanfiction about it? Good question. My answer is that the book's ending simply doesn't settle it for me. Being a person who believes in the goodness of humanity as opposed to its evil, I wanted to show a more balanced view of the universe. William Golding may disagree, but then again, I'm not writing to please him.

This piece also has the honor of being tagged with both "dark" and "optimistic." I'm not sure which outweighs which. Oh, and disclaimer: I do not own Lord of the Flies, nor do I want to. Also, spoilers if you haven't read the book.

001.
He fully expects them to just dump him on his parents' doorstep back in Britain and assume that his life will continue exactly the way it did before the plane crash. He, of course, knows that this would never work—he was changed out there and his parents are no longer a part of his world. It's just him and the boys and the rocks and the meat and the flesh—

But Roger forgets, as he always does, that the world does not revolve around him, that the world can be traumatized and experience terror and change too. Britain was bombed into rubble and the navy boat is currently making its way to a refugee camp in America, the last holdout of the apocalypse, the only safe harbor.

“To start a new life,” the Captain explains, and Roger chuckles darkly to himself because this is the third “new life” he's started and the previous two didn't end particularly well.

002.
At the refugee camp, they don't care about any of the horrors you've been through in the past. Everyone there has suffered. There's no use whining about it. What's important is this day, only this day and how you can survive to see another.

It's the perfect environment for Roger to become wild again. In this place where no one cares, when there are far too many people who need help for anybody to receive it, Roger sharpens a stick on both ends with a Swiss Army knife and goes pig-hunting.

They stop him just before he's about to spear the little boy and knock him to the ground, desperately searching for some way to get him under control. They ask if anybody knows him and it feels like hours before one of the boys—Jack or Sam or Maurice—speaks up. “That's Roger. We don't know his last name. He came with us.”

Whichever refugee was holding him down pulls him up and thrusts him into Jack/Sam/Maurice's arms. “You take him, then.”

Roger wants to pick up a boulder and shove it at that refugee, the stinking pig, but he's still being restrained and a voice that he can't place murmurs in his ear. “Come on. We're taking you to the hospital.”

003.
The hospital isn't that great of a hospital, given that there are so few doctors and too many patients to count. But they make room for him anyway, if only because this is a problem that affects the whole community and isn't going to go away very soon. The island boys—all of them, or at least all that are left—sign him in and try to explain about the plane crash and the island and how Roger was the executioner. The doctors say they never heard of it. “Of course you've never heard of it,” says Jack. He plays the charming, obedient kiss-up of a boy very well, but anyone who lived on the island can see the wildness trapped beneath his eyes. “We weren't allowed to tell.”

And if there's any advantage of having this hospital in the middle of a refugee camp in the middle of a war, it's that these doctors understand better than anyone what shell-shock is and how it can destroy the human soul. They've gotten used to it, seeing it all so much, and so they're able to step back and figure out a way to try and keep it at bay. The doctors promise to every single former island boy that they are going to help them all through this.

The doctors look at each other and it's clear that they think otherwise.

The thought gives him so much pain that he figures he's probably died and gone to hell.

005.
He sees a girl his age and panics, completely freezing up, his heart thump-thumping in a way that screams for him to run, run as fast and far away as you can even though he can't. This creature just doesn't click in his mind. Is it boy or beast? Adult or animal? Parent or pig?

“What's your name?” the girl asks, and Roger just sits there trying to figure this situation out and wishing that he'd stop being afraid that she'll grow fangs and tear him to shreds.

It's literally days before she gets an answer. “Roger,” the boy croaks, almost quiet enough to be a whisper. “My name is Roger and I'm the Lord of the Flies.”

“Rachel,” she says, extending her hand.

006.
Their conversations after that are sporadic and short. They don't even seek each other out at first, just happening to pass each other on the way to the hospital or the mess hall. There would be a quick nod of recognition, a few exchanged pleasantries, a friendly smile from Rachel. He doesn't know quite what to think of that smile. It's so out of place in his world.

The boys notice, as boys always do, and start teasing him about having a crush on the girl. Roger doesn't have the energy to deny their claims, but inside he knows they're wrong. Rachel is meaningful to him, but not in that way. She's far too good for a monster like him, anyway.

He starts stopping by her tent and sitting next to her, at first in silence, later with talk. They ask each other simple, trivial things. Roger inadvertently memorizes all her answers. Rachel Laura Hobson, eleven years old, whose favorite food is strawberry shortcake and favorite color is green.

After some time, he realizes that he's actually enjoying these conversation. Anything to take his mind off of the island.

007.
She introduces him to her little brothers and their friends. As he watches them play, Roger can't help but envy their naïvety. Had he once been as childish as that? It's hard to imagine—anything after that fateful plane crash seems lifetimes away.

One day they're building sandcastles on the beach and Roger immediately finds his hand reaching for a rock to throw. His throat dries up and he stares nervously at Rachel's questioning eyes. After four seconds of paralyzing terror, he bolts away, memories of the island swallowing his mind.

Roger dreams that he is in a boat, drifting away from the hellish spot of land in the sea with its pink coral rocks and burned-away forest. The boat stops and he can hear the sounds of screams rushing in with the wind.

And suddenly he's back there with Piggy and Simon and the boy with the mulberry birthmark, all dead, blood gushing out of their corpses and mixing with the sand, staining it red. He wants to cover his ears and make the moan of pain go away, but they just get louder and louder until he can barely stand it anymore. There's no Rachel to divert his attention, no friend to talk to. It's just him and all the horrible things he's seen and done.

It all comes pouring out without him realizing it, all his deepest and darkest emotions, regrets. Every person he's murdered, every soul he's shattered. Everything that happened on that coral island and everything since then. All the little details that, added up, cost him his sanity and self-control. He finds himself on the verge of crying so many times, but always pulls himself back. Tears make you look weak.

For a long moment—maybe hours, maybe seconds—they sit in silence. Then Rachel puts a hand on his shoulder, stares straight into his eyes, and whispers. “It's not your fault.”

“It is,” he says, voice breaking. “I'm a killer.” He tries to brush her hand off, but she just grabs his hand and squeezes it in sympathy.

“It's not your fault,” she repeats. “You couldn't have helped what happened there.”

“I could! I could have stopped it all-”

“Maybe you could, but that doesn't matter now.” She takes in a breath, encouraging Roger to do the same. “What's done can't be undone. You need to move forward.”

“I can't.” His whole body is shaking now, beyond his control. “I'm always there. I'm always back on the island. Flashbacks, nightmares. You have no idea what I've gone through.”

Rachel pauses, biting her lip, before saying, “I may, or I may not. But that doesn't matter now.” She squeezes his hand again. “We can help each other heal.”

010.
They were fools to think that the moment an adult set foot on the island all their problems would be solved. Sure, it quieted them for a while, shocked them into submission, but it was far from permanent. It didn't heal, it didn't fix. It was like putting band-aids over a broken bone.

Real healing takes time, lots and lots of time. It takes patience and care and emotion and people who truly, sincerely believe that you matter, that you are important, important enough for me to take the time to help you through this. And you will make it through.

Those island-boys were never going to revert to the way they were before; they would always be scarred. But in the end, scars are just scars and even if man's heart has too much darkness, it also has love and love and love beyond measure. Roger just had to relearn where to look.