A Beginner's Guide to THE OMNISCIENCE 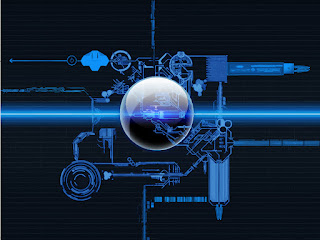 Image taken from http://www.freevector.com/site_media/preview_images/FreeVector-Futuristic-Machinery.jpg, courtesy of The Internet. It depicts some cool piece of futuristic machinery.

I'm mostly posting this so when I write fanfiction for my own original work on Runaway Tales I can link back here and people will know what I'm talking about. Oh, and also so I can give all my lovely blog readers another taste of my novel-in-progress. Enjoy!

A Beginner's Guide to THE OMNISCIENCE
It isn't a dystopia. No, I'm serious. It's a YA sci-fi novel with a slightly steampunk feel—the only real dystopic element is the idea of a machine making people's decisions. The fact that it's not a dystopia is actually a major plot point.

The basic premise is this: At the age of eighteen, every citizen is obligated to be tested and analyzed for a week by a Machine known as the Omniscience, or the Omni for short. The Omni determines one's occupation, social class, probable income, and even location. It is an essential ingredient for a functioning society. But when the Machine suddenly shuts down with hundreds of teenagers inside, what was built as a tool to ensure happiness becomes an implement of everyone's worst nightmares. The Omni is intent on destroying itself and everyone inside, and there are only a few brave teenagers who can survive long enough to save it—which would be...
There also happen to be people living inside of the Omni: teens and former teens reported as having “disappeared” when, in actuality, they've been recruited by their mysterious leader, “the Boss,” to help in securing the destruction of the Omni. Whether they actually believe in this goal or just can't figure out how to escape the Machine is questionable. These include:
And that's about it, without delving into the details of the plot—I hope to get this published someday, so I don't want to accidentally give away spoilers. Also, this was written for National Novel-Writing Month 2011 (won, by the way!), so I'm currently revising it to make it make sense.
Posted by Amata le Fay at 7:32 PM